Get Together at the Bauhaus

Employees and partners of the Bauhaus Dessau Foundation invite neighbours and guests to get together at the Bauhaus Museum Dessau and the Bauhaus Building.

At the  B a u h a u s  M u s e u m  D e s s a u , a programme of activities awaits visitors from 3:30 pm, including participatory activities, games and sports, guided tours through the exhibitions, open dialogue, film screenings and music.

Around the  B a u h a u s   B u i l d i n g , guests can visit a colourful tent exhibition from 3 pm and experience a special football tournament, creative activities for young and old, lectures, guided tours and a stage programme.

At both locations, food and drink is provided by partners from the neighbourhood on a donation basis. The donations go to the Anhalt-Hospiz Dessau. Admission to all events is free.

The get together is part of the programme Reconciliation Creates Peace of the Netzwerk Gelebte Demokratie für Dessau-Roßlau on 7 March. For years, right-wing extremists have used the date of the Dessau bombing on 7 March 1945 as an opportunity to organise their marches. As a sign against intolerance and exclusion, we set a programme for all. The Bauhaus in Dessau was and is an international and open place. It is this diversity that made the Bauhaus remarkable. In 1932, the Nazis closed the Bauhaus in Dessau and forced it to dissolve in Berlin. 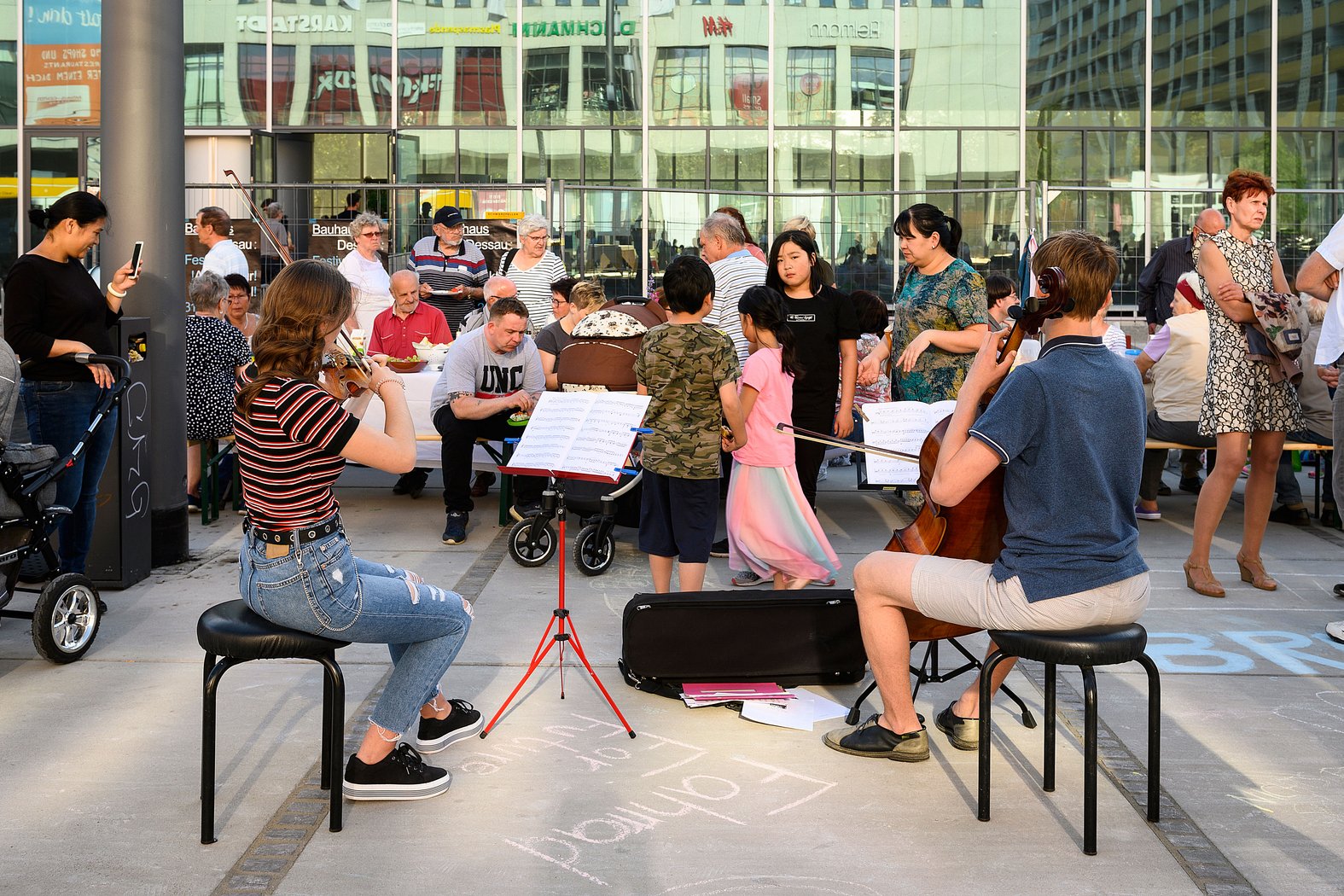 It is no coincidence that the moving sound pyramids of the band Tourists at Home remind us of the rushing festivities of the Bauhaus people, at which the in-house Bauhaus band played. The world is sound!

3.30 – 6 pm
Bauhaus dance international
Performance demonstration to join in
By and with Torsten Blume, the Bauhaus Stage Studio Programme and the Anhalt University of Applied Science
> Mies-van-der-Rohe-Platz in front of the Bauhaus Museum Dessau

From September to December 2014, eight young people worked on the project a to prepare the life stories of Esther Bejarano, Doris Grozdanovičová, Fruma Kučinskienė, Rozette Kats, Ernesto Kroch, Wilhelm Brasse and Franz Rosenbach. In exhibition panels and video interviews, the exhibition focuses on the life stories of the contemporary witnesses who were affected by the National Socialist terror and extermination policies. Since 1998, the AJZ Dessau e.V. has grown an archive of contemporary witnesses by currently preserving the testimonies of 127 survivors.

Four well-known illustrators from Europe have created their vision of the world and designed their own globe: Beppe Giacobbe, Guido Scarabottolo, Le Duo and Marti Guixé. What should your world look like? Are there still boundaries? What connects people? Globes and pencils for your world designs are ready. The most beautiful designs will be on display in the shop until the end of March.

After the Bauhäusler had to leave Weimar for political and financial reasons, they moved to Dessau in 1925. At that time a prospering industrial city, where they were warmly welcomed by many people. A close network of entrepreneurs, engineers and politicians supported the move of the Bauhaus, including the Dessau Lord Mayor Fritz Hesse, the engineer Hugo Junkers and the State Conservator Ludwig Grote. Best conditions for a new beginning.

What is no longer visible: The Bauhaus Masters and their students very quickly adapted to the city. They stood out somehow and offended with their ideas, but they were no outsiders. Quite the contrary. The Bauhaus parties were legendary in the 1920s already. They formed the cityscape and shaped social life. However, these good times came to an end very soon: The Bauhaus was closed in 1932 by a resolution of the National Socialist city council.

> Event room of the Bauhaus Museum Dessau (in German) 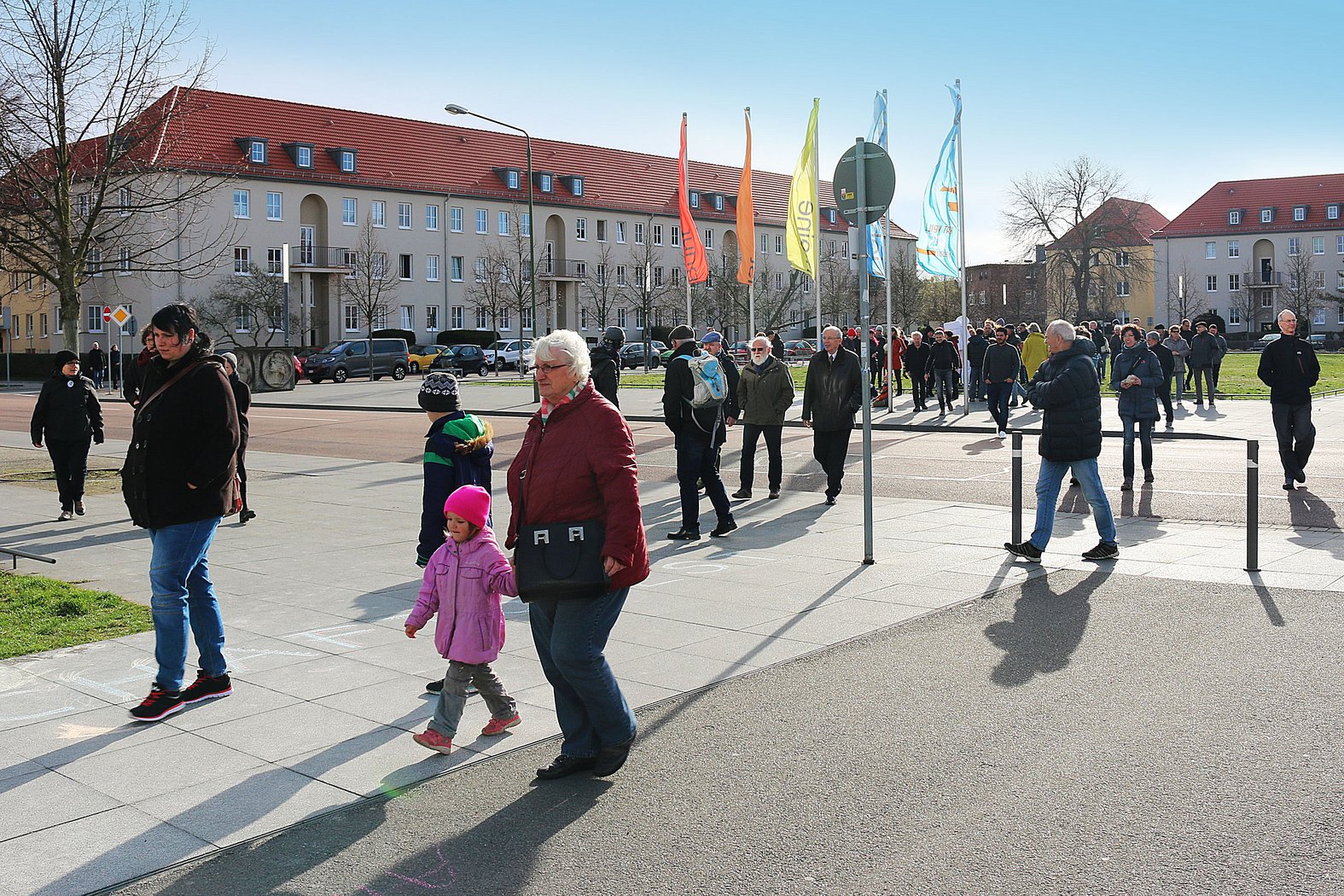 3 pm
Welcome
By Regina Bittner, Head of Academy and Deputy Director
> Lawn in front of the workshop wing

In this mixture of sporting action and concert, the players wear sound backpacks that interact acoustically with each other and react to the movements, so that new sound mixtures are created as the game progresses: So playing soccer becomes a composition and the small tournament with 4 teams becomes a concert in 3 parts.

3.30 – 4.30 pm
Walk through the Bauhaus quarter
With Wolfgang Thöner, head of the collection of the Bauhaus Dessau Foundation
> Meeting point under the Bauhaus bridge

What was the situation around the Bauhaus Building after the Dessau bombing on 7 March 1945? What was the significance of the reconstruction of the school building and the residential and business premises in the neighbourhood? Which of Dessau's proposed solutions for reconstruction were implemented and which were rejected? And what traces of destruction, forgetting and remembering can still be found around the Bauhaus Building today?

1932 was a fateful year for the Bauhaus: After the Dessau city council had rejected a motion by the NSDAP to close the school and demolish the building in January, it finally approved it by a narrow majority in August. As a result, the Bauhaus left Dessau on 30 September to reestablish itself in Berlin as the private institute of Ludwig Mies van der Rohe. In his lecture, Peter Bernhard illuminates the background that led to the closure of the Dessau Bauhaus and provides an insight into the new beginning in Berlin.

How do people radicalize themselves on the Internet? How does a real scenario of threat emerge? Because sometimes an inflamed head can be carried from its body at night to a refugee home to be set on fire. Is the head awake then?
Arne Vogelgesang's Flammende Köpfe, conceived for a performer and a virtual choir of head avatars, traces the path from the living room to the Internet uprising. Vogelgesang draws on his extensive, constantly updated collection of propaganda videos from the Internet. A curious, entertaining evening of theatre that teaches fear – with subsequent discussion.

School classes or groups of 10 people or more can register in advance by e-mail.

In the audience discussion following the video lecture performance Flammende Köpfe, the audience can exchange their experiences and impressions with the artist and ask questions.