The Bauhaus Lab 2016 once again invites young architects, designer, sociologists and curators to research together at the Bauhaus Dessau for three months. The programme is intended for young professionals from all over the world who favour in-depth work in a collective.

This year’s Lab addresses the topic of migration at the Bauhaus. The point of departure is the desk of Walter Gropius, which travelled with the founder of the Bauhaus to each of his places of exile.

Walter Gropius’s desk: It is quite an unusual idea to place a desk at the centre of an architecture and design theory research programme. How did the idea come about?

Most of the objects found in our collection today have long, global migrations behind them due to the turbulent and dramatic history and reception of the Bauhaus over the last century. Mies van der Rohe’s cantilever chair stands to this day in the home of the son of the Bauhaus student Chanan Frenkel in Tel Aviv. Behind this is a history of departure, migration and arrival. To my mind it is important that we do not present Bauhaus objects merely as design icons on a plinth in a museum, but that we also tell the story behind them. That’s how the idea came about to trace the movements of Walter Gropius’s desk for this year’s Lab. 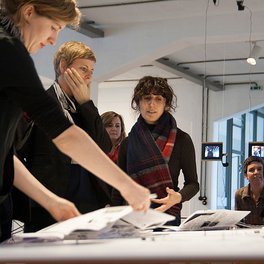 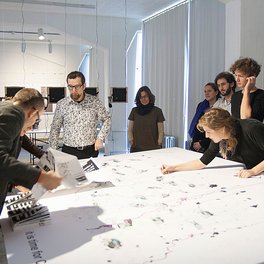 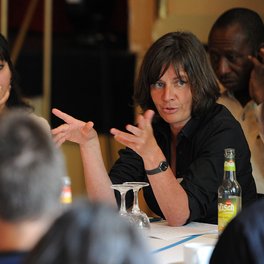 What is the Lab’s methodical approach? What can the participants expect?

The three-month programme has several phases: We begin by locating the desk in the Bauhaus’s history by way of lectures, seminars on the history of the modern interior, Bauhaus research articles and archive visits. How did these describe and deal with the desk? From there, we take theoretical excursions into cultural scientific and anthropological debates concerning the role of “things” and materials.

Before we undertake our own journey to London and New England, the participants’ respective modes of observation and research interests will be decided. The trip to London and New England will take place in late May and will include visits to archives, interviews and film and photo documentation. Back in Dessau, we will sort out the material and, in workshops, develop the curatorial concept based on the research and from there work out a small exhibition for the anteroom of the Director’s Room, which will be opened on the completion of the Lab.

Migration is a highly topical subject. Will connections be made between the historic field of research and the current situation?

What would one take, if one had to leave home? A migration history of the Bauhaus based on this bulky piece of furniture is hardly comparable with the current difficulties of those who are fleeing their homelands today.

Nonetheless, to describe the Bauhaus today as a migrant that in its brief period of existence was so hugely productive and innovative precisely because of this, which despite the increasingly harsh nationalistic climate in the 1920 managed to remain cosmopolitan – there might be a lesson in that for today, too. With this we conceive of it as a cultural legacy of international modernism that gained its vitality and charisma from precisely these vivid cultural exchanges and encounters and  not from the closing-off and exclusion.

The Lab is an internationally advertised English language programme. Where do the participants come from, and are they mostly architects?

The Lab is a programme that is aimed at architects, designers, curators and arts and culture scholars from all over the world. In the past the participants have come from Canada, the USA, China, Portugal, Scotland, Australia, Belgium, Turkey, Spain and Russia. Quite a good mix therefore, and that also applies to the disciplines.

The Bauhaus building in Dessau is regarded as an icon of modernism. What is it like to work in this building and what are the day-to-day lives of the Lab participants like?

We are fortunate to be able to work in one of the building’s finest spaces, the former metal workshop. The programme is pretty intensive: in the initial stage the priority is on building up a common knowledge of the subject of research. I emphasise “common” because it is about a collaborative process, as a result of which an exhibition should come about. During the first weeks, this collecting is reflected on the walls in copies, sketches, maps, and notes originating from the discussions, seminars and investigations.

After the trip this mountain of materials grows again, before the difficult phase of sorting, organising and structuring, of finding the concept, begins. From here, ideas for the realisation of the spatial concept are then developed. It is invariably a challenge to curate with eight people, but the result is always worth the effort, because exhibitions are always something like accessible, three-dimensional hypotheses that offer insights as well as room for speculation. This is also how the Bauhauslers already understood their exhibition experiments back in the 1920s.